A Life of Pie

I almost called this “Home Alone”, but I wasn’t entirely alone, there were the four dogs, and the pork pie.

Clarissa jetted off to Dubai and then India for a week as the unpaid assistant of an internationally famous DJ. That’s a sentence I never thought I’d write. Luckily for me she was anxious about how I was to survive her absence and suggested a pork pie to help tide me over. Clarissa’s pork pies crop up from time to time throughout the year, though at increasingly longer intervals more’s the pity. 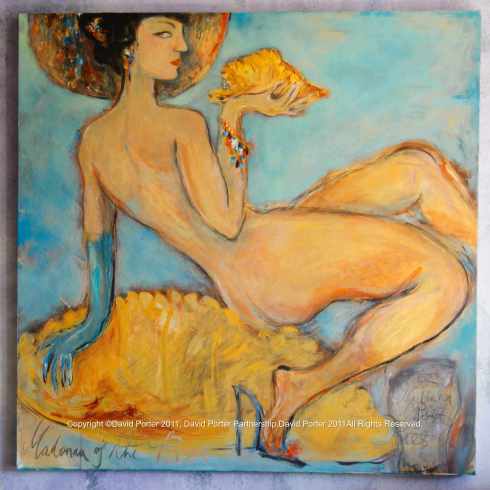 A few years ago pies of all shapes and sizes seemed to pour out of our kitchen. She even painted a portrait of herself perched on a giant pasty and called it ‘Madonna of The Pies’.

The Oxford Dictionary notes that the word ‘pie’ dates from the first years of the 14th Century, Alan Davidson in his “Oxford Companion to Food” suggested pie maybe shortened from ‘magpie’, a collection of different ingredients. Early pies were called coffyns, the pastry, hard and strong,  a container for the filling and sometimes discarded.  The pastry was so indestructible that the pie could be placed directly onto the embers of the fire so that the pie crust became its own oven. The raised pork pie is a direct descendant of these early coffyns, certainly the first pork pie recorded in the Melton Mowbray area dates from the 14th Century.

The old recipes are seasonal, traditionally September is the beginning of the pork pie season because Autumn was the time when pigs were killed in readiness for the long hard winter. Lard rendered from pork fat is an essential ingredient in the pastry, which is called ‘hot water pastry’ and necessary to construct a raised pie as distinct from a flat or plate pie, or where the pastry crust simply  covers an open pie. The dough is raised by hand, sometimes over a wooden ‘dolly’ and sometimes using a bowl as a mould to shape the pie. Clarissa has made some free-form pies as well, but however you do it the resulting pie is likely to be uneven, sometimes very uneven as the pie will sag and tilt during the cooking. The baked crust will be shiny and fairly water-tight so you can fill the pie with hot liquid meat jelly. One of our earliest pie-making mistakes was to not make the crust thick enough to hold the stock without collapsing. Getting the amounts right for the jelly is a bit hit and miss, but I don’t think it is crucial if you don’t fill the pie completely. The oldest recipes use uncured pork and mashed anchovies, the result is an old-fashioned taste and distinctive grey meat, unlike the artificially pink shop-bought pork pie.

Melton Mowbray has attained  PDO status (protected designation of origin) in recognition of their pies historic importance, but other areas for instance Yorkshire and Cheshire lay claim to producing some excellent traditional pork pies. Wilson’s the Leeds butchers have become famous for their three-tiered pork pie wedding cake,  and the Pork Pie Appreciation Society is in Yorkshire. Every March they hold a pork pie competition; here’s their amazing  tribute to the pork pie! 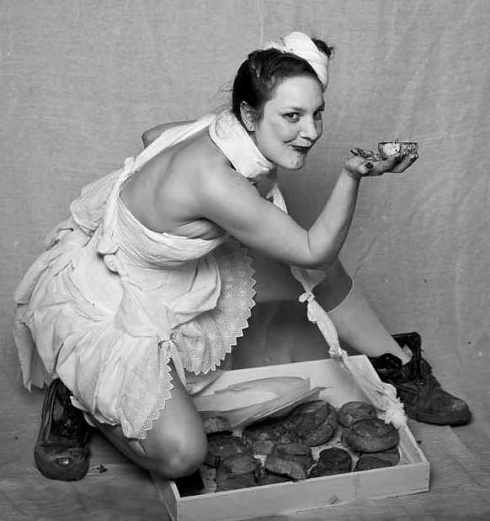 Nearer to home Malika Mezeli  aka ‘Lardy Da’ makes homemade rare breed pork pies and renders her own lard from pork fat at home in Peckham. I think Malika is a local treasure, she tries to use every part of the animal and even makes pig’s head terrine!

You can find Lardy Da at Blackheath Farmers’ Market on the first and second Sunday of the month, and at other London markets.

In the past I’ve bought pork for our pies from Wellbeloved’s in Tanners Hill, or  Christine’s and JC Smith’s in Deptford High Street, and memorably from Northfield Farm in Rutland and Borough Market.  Memorably because if like me you can remember what pork used to taste like before the  supermarkets told us we wanted lean flavourless pork, then Northfield Farm’s pork is indescribably nostalgic; “there are few places I’d travel 400 miles to buy meat,” said Clarissa Dickson Wright of Northfield Farm, which is also a member of the Melton Mowbray Pork Pie Association.  I did travel to Northfield Farm a couple of years ago, and met farmer and ex-banker Jan McCourt. Jan took me to see his Iron Age pigs, he suggested we didn’t get too close to them;  they were, he said, a bit aggressive and likely to ignore the electric fence in an attempt to attack us!

So I had to be content with a photograph of Jan with some goats, their only aggression was to try and eat my camera bag, and butt me from behind as I bent over.

But this time we were in Nunhead so we bought the pork from HA Smith & Son. This would be the biggest pie Clarissa has made for some time, and I’m happy to say that even sharing slices with the lurcher, it lasted the week. Of course I was lonely that week and even talked to the dog. Every night on the doorstep after his walk I quoted Withnail to him: “first, we go in there and get wrecked, then we eat a pork pie!” He looked puzzled but agreed.

The ingredients and method are listed in the order they were prepared and cooked,  the cooking time for the pie is about 2 1/2 hours, preparation 30 minutes, and preparing the stock 3 1/2 hours, but that happens along with the cooking of the pie, or you can prepare the stock earlier.

For the Jelly Stock:

Bones from the pork, shoulder and ribs

Sprigs of Thyme and Parsley and some bay leaves

Put all the above into a large saucepan and bring to the boil, then reduce the heat and simmer for 3 hours. Then strain through a sieve and put back on the heat till the stock is reduced to about 450 ml.  Season with pepper and salt, or 2 tbs of fruit jelly (I used some wild plum jelly I’d made).

Allow to cool, it will set into a jelly.

1.35 kg pork belly, ribs removed by the butcher and reserved for the stock

1.35 kg pork shoulder, bone removed by the butcher and reserved for the stock

(when the bones have been removed the weight is considerably less)

Hand chop the meat and fat rather than mince so you have small chunks. Put all the meat into a mixing bowl and add the rest of the ingredients for the filling, mix it all together with your hands or a wooden spoon then put to one side.

For the Hot Water Pastry:

In a large saucepan bring the water and lard to the boil. Mix the salt and icing sugar into the flour, remove the hot liquid from the heat and quickly shoot the flour into the hot water, stirring with a wooden spoon. You’ll need a strong spoon because you must stir briskly till the dough forms a smooth ball. Turn out the dough onto a board and when it is cool enough to handle quickly knead the dough for a few moments. Then let it cool some more and divide it by cutting off a quarter of the dough and putting that to one side for the lid.

The cheats way to make a raised pie would be to use a loose-ringed cake tin and press the dough into the tin and up the sides. But Clarissa took the larger ball of dough and plunged her fist into the middle and gradually worked the dough outwards and at the same time upwards, drawing it up and out using both her floured hands. When the dough looks about right, about 15 cm high, and in other words like a pie (!), draw the sides inwards slightly then quickly secure the sides with a piece of grease proof paper folded in half and loosely tied with string.

Pile the meat filling into the pie, pushing it gently down and around the pie case. Remove the paper and gently mould the pastry against the filling with the palms of your hands. Take the reserved ball of dough and just using your hands, flatten it into a lid and lay it onto the pie, crimping the lid into the sides with your fingers. Decorate the top with bits of leftover dough and make a large steam hole in the middle of the lid. Wet the bay leaves and arrange them around the outside, then again wrap the pie sides in greaseproof paper doubled-over and secured with string. Glaze the top with beaten egg. Then using a wide fish slice, mine is 25 cm wide, or two together, carefully slide the pie onto a lipped baking sheet and put in your oven preheated to 180 C (350F) for 2 – 2 1/2 hours. Remove from the oven and take off the paper then put it back in the oven for 15 minutes.

Remove from the oven, tie more greaseproof around it, loosely, and allow to cool. Meanwhile, gently warm the jellied stock so it melts and using a funnel or great care, pour the stock into the pie through the steam hole. This takes a little time as the stock dribbles down through the pie and fills the spaces inside, so do it a little at the time. Leftover stock can be frozen for future pies! Finally, if you wish, fill the steam hole with fruit jelly, or jam, which I’d also serve with the pie.

Allow the pie to cool and set overnight still wrapped in the paper, before imagining yourself in a coaching inn on the Great North Road, a deerhound at your feet, sitting beside a blazing fire with a pint of Porter and a slice of pie, the taste of Old England.

One response to “A Life of Pie”