Walking the dog around the streets of SE8 and SE4 I can’t ignore the huge amount of fruit falling onto the pavements, unwanted and unloved.

Now it’s damsons and crab apples and soon there’ll be pears and apples, figs and nuts of various kinds.  Not forgetting the blackberries which are early this year, our own Oregon Thornless isn’t quite ready but it looks as if it’ll be a bumper year in our front garden which becomes a rendezvous point for the local mums and toddlers.

It’s a bit of an obsession, finding free fruit. Everywhere I go I take old carrier bags, and if I’m in the car there’s always a coolbox alongside the Wonder Lurcher . For this recipe I gathered 5 lb (2.3 kg) of damsons from the road and pavement just 200 yards from my house, it took 5 minutes and I was studiously ignored by passers-by. 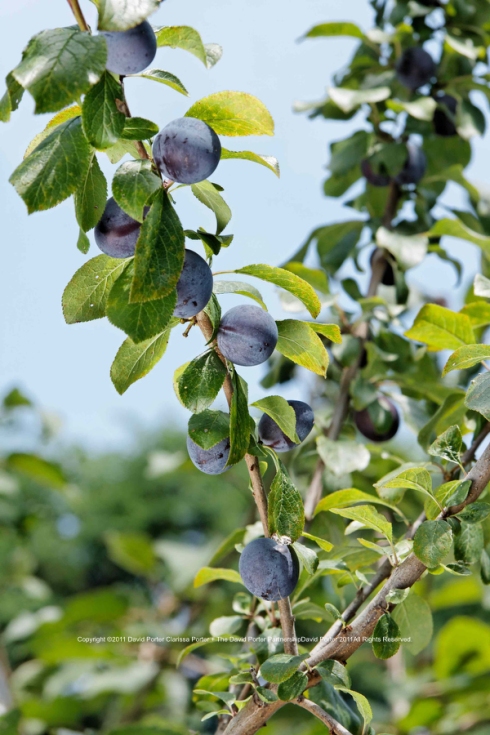 The tree is old grey and twisted, and this year heavy with fruit. I did the polite thing and knocked and asked if I could have some, but was told curtly that I could only have the windfalls in the street. Oh well, I know how she feels. Our blackberry trails along our railings at the front of our house, there’s always more fruit on the pavement side, its the sunnier side, and passers-by help themselves, which is nice I think. Though sometimes we arrive home to find people trampling around our front garden. Last year a woman knocked at our door on her way home from the Hillyfields farmers’ market. She was carrying apples in her pulled-up skirt,  a bit eccentric I thought.  Three children peered at me from behind her skirt, “I’m going to make an apple pie,” she beamed, “would you mind if I picked a few blackberries to put in the pie?” Of course not I said, but then a few minutes later I glanced out the window and saw her and the children frantically stripping the bush, grabbing handfuls of squashed fruit till her carrier bag looked like an over-stuffed pillow. “So that’s why she’s carrying the apples in her skirt,” sighed Clarissa.

About 95% of our fruit is imported, 71% of our apples come from abroad, surely this is wrong on so many levels. For nearly 500 years we were a great fruit-growing nation, then suddenly we’re not anymore. The big food retailers strive to remove risk when stocking fruit, they do this by only stocking fruit that isn’t ripe. They say that it will ripen in the fruit bowl at home. They say this is what the consumer wants because he or she only wants to shop once a week so it needs to keep for a week. The trouble is, as I’m sure you know, it usually goes straight from unripe to rotten, and consumers have forgotten what really ripe fruit tastes like, or looks like. Supermarket fruit has a good ‘shelf life’, which may be good for the shelf but isn’t good for the fruit.

In Sheffield Stephen Watts left school after A levels and didn’t know what to do, so to fill his time he started growing vegetables on an allotment. He spent three years learning about horticulture, biodynamics, and organic farming.

In 2005 he cycled around Sheffield mapping old and neglected fruit trees he found in back gardens and on waste ground, finding apples, pears, plums, figs, cherries, hazelnuts, sweet chestnuts and quince.  By happy coincidence Anne-Marie Culhane, a community artist, arrived in Sheffield in 2007, and she too cycled around noticing the old fruit trees, “The whole city is full of fruit,” she thought, “and loads of it is going to waste.”

Getting together with Stephen they founded the ‘Abundance‘ Project.  Says Stephen, “I knew where the trees were and how and when to harvest them, and Anne-Marie knew how to make it into a project, how to get funding and get people on board. It wouldn’t have happened without the two of us.”  Starting with half a dozen volunteers they scoured the city, knocking on doors. “It changed my life,” said Stephen, simply. 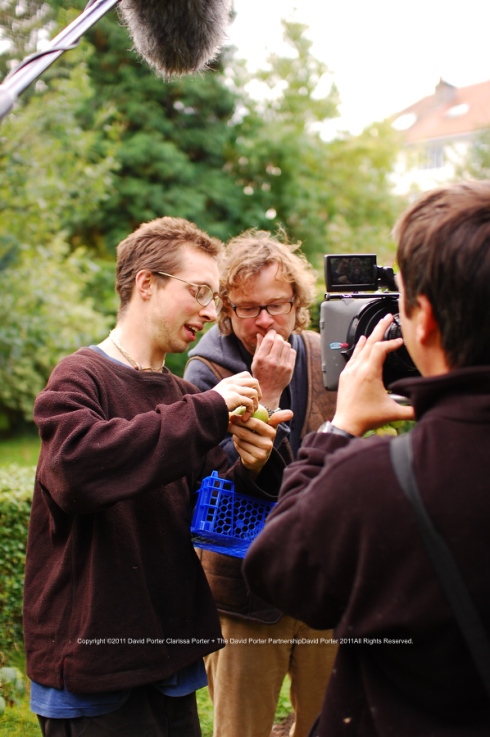 Now they’ve had a visit from Hugh Fearnley Whittingstall, who helped pick and juice for ‘River Cottage‘,  and Stephen travels around encouraging  other towns to follow their example. The Abundance idea has spread to Manchester, Reading, Bristol, Oxford, Brighton, and Plymouth so far.

They begin harvesting in August and carry on till October, distributing the fruit, fresh or made into jams, pickles, cider and juices around Sheffield for free. About half the fruit is pressed for juice which can be frozen, and the waste is composted. Abundance ticks all the boxes, food miles, carbon footprint, healthy eating, and community involvement. In South East London we have several Transition Town groups in New Cross, Brockley, Lewisham etc., and Project Dirt in Deptford’s Utrophia. I might be wrong, but these groups seem to be more about growing food than gathering what is already there and going to waste.

Not everyone likes damsons and their tart  grown-up taste, but the thing about damsons that really fascinates me is that they haven’t been changed by breeding, the damson you taste today will taste the same as the damson that St Paul might have eaten on the road to Damascus. Damson is a shortened form of Damascene, the plum of Damascus.

Here’s a really simple damson pickle recipe, I’m going to put the pickle away in a cool dark place for at least two months, probably till Christmas.  You’ll need plenty of glass or plastic storage jars, don’t use anything metal or it will react with the vinegar. I bought mine in Deptford High Street, most of the general stores sell them and they are cheap, I think.

For the photograph I had to try the pickle freshly made and it was delicious, sweet and subtle. The blue-veined Cheddar cheese came from Green’s of Glastonbury at Blackheath Farmers Market, and the bread from Els Kitchen in Ladywell. “It’s French,” offered El, I think she meant the style of loaf, pain de campagne, and it did have a slight resemblance to Serge Gainsbourg.

Wash the damsons and then slice them all the way around with a sharp pointed knife (I used a fish filleting knife) then twist them so they separate into two halves, remove the stones and discard. Then put the fruit into a large jam pan and add all the other ingredients and stir together. Put on your hob and heat, slowly bring to the boil and simmer for between 30 and 45 minutes depending on size of your pan.  Stir from time to time as it becomes thicker. You’ll need to simmer till the mixture reaches the setting stage, that is when you push a spoon through the surface of the mixture and it begins to resemble thin jam. It’s not too critical, but if you over boil or heat too long the pickle will be bitter.

Have ready some clean storage jars and some greaseproof paper.When you think the pickle is ready, pour into the jars and seal. Leave for a couple of hours then cut circles of greaseproof and rest on top of the pickle and reseal. Wait till Christmas!?